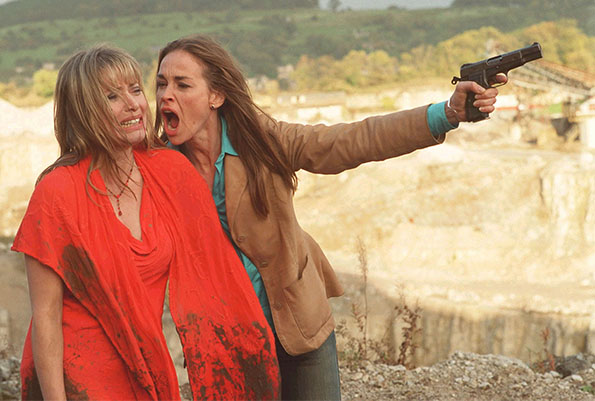 The current series of Peak Practice has had viewers on the edge of their seats, and its shattering climax promises to keep you there.

As the episode opens, all the arrangements are in place for the wedding of doctors Tom Deneley and Alex Redman. There’s just one problem, Claire Brightwell is secretly back in Cardale after her drugs overdose and she’s more deranged than ever.

‘Claire originally came to Cardale for one reason only, to make Alex love her,’ says Eva. ‘Claire became infatuated during their time together in the army, but once she arrived in the Peaks, it was clear the relationship was always going to be one way. Soon, Claire was becoming desperate. Then when she had to deal with the trauma of dead and dying marines at the helicopter crash, it tipped her over the edge. Her troubles became a deep psychosis, so it was a relief for everyone when she was seen to leave Cardale.’

Claire starts causing trouble when she rings up the register office posing as Alex and cancels the wedding. When Tom hears he confronts Alex only to learn she’s just as mystified. Luckily, Sidney, a patient of Wills hears of the dilemma and reveals he’s not the essential garden everyone believed but the owner of a stately hall which just happens to have a wedding licence.

So the big day is back on. But the happy quiet couples nightmare has only just begun. ‘Claire’s in a confused state and is now a dangerous woman,’ says Eva.

En route to the ceremony, Tom and Alex find the emergency services attending a stricken cable car which contains Dr. Matt Kendal and charity runner Mark King, a patient who has heart problems. Encouraged by Alex, Tom tries a daring rescue as she continues to Sidney’s house.

Meanwhile, Claire arrives at the emergency scene and gets hold of Tom’s phone. At the wedding venue Alex receives a text message from Tom’s phone asking her to meet him outside. But when the would be bride emerges, she’s confronted by Claire brandishing a loaded gun. There are plenty more shocking twists to the tale before the episode is over. But be prepared for the ultimate in cliffhangers.